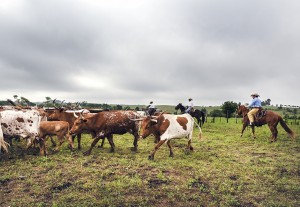 The Town of Hooker reportedly was named for John “Hooker” Threlkyld according to the book “Lost Trails of the Cimarron” written by Liberal, Kansas newspaperman, Harry Chrisman. But how did John get his nickname of “Hooker?”

A news clipping from the 1930’s reports that about 1873 John became foreman of a cow ranch in southeast Colorado near the “West End.” General Hooker of Civil War fame was in command of a regiment policing this part of the country. Some of the settlers were besieged by the Indians within the stockade at old company M. They were hoping for help from General Hooker. As they saw a cloud of dust from the rescuers approaching, a cheer went up for Hooker and his men. The rescue party turned out to be Threlkyld and his men, but the settlers said they were “just as good as”… And forthwith, his men referred to him as “Hooker”.

Others say he was named “Hooker” because he was a smooth ‘hooker of cattle.’ That is, a roper of cattle…Old cowboys of the day say they saw him in action, being able to ride quietly into a herd, drop a tight, small and fast loop from either side of his mount and catch calves standing beside or under their mothers. This type of roping, more than the sensational run-and-catch kind, accomplished a day’s work on the range with speed and without ostentation.

Threlkyld became known to area cattlemen as “John Hooker.” He was a respected worker, and served as foreman for many, working for the Hall Brothers, the O.X. Ranch owned by the Tory Brothers, and was known from the Cimarron to the Brazos. After the “big die off” when so many cattle died in a blizzard, and some outfits sold out and moved elsewhere, Threlkyld was the given the side camp of the O.X. Ranch and it was known as “Hooker.” John Hooker left the area during the Spanish American War, and returned for a visit in the 1930s being introduced to area businessmen by Boss Neff as “the man Hooker was named for.”

Mrs. J. K. Reynolds of Morris says she got this story from her cousin, Arthur L. Hooker, concerning his grandfather Thomas Oscar Hooker. When T.O. Hooker was 16 years old, he hunted buffalo in the Oklahoma Panhandle, Colorado and Kansas. The buffalo tongues were salted down in wooden boxes and sent back east to be sold as a delicacy. Indians would sneak into camp at night and steal the salted tongues.

One night T.O. Hooker hid and slammed the lid down on an Indian who was attempting to steal the tongues. The screams woke the camp. Indians ceased to bother the buffalo hunters and 16 year old Hooker was acclaimed a hero. Henceforth they referred to the camp as Hooker Camp.

The History of the Library

Olive Warner Memorial Library, here since 1904 is Not a Carnegie library, but it has been produced by its residents. In November, 1904, the Hooker Sabbath School had a library of 100 books, the result of the efforts of a Mrs. King, who had a claim north of town. She had given a party for her friends in Chicago and asked each one to bring a book to contribute for her to take with her to the “Last Frontier- that unsettled No Man’s Land” of the Oklahoma Panhandle. The books were first given out on Nov. 27 that same year.

And so it continues, the giving and sharing of books, when Olive Warner became librarian in October, 1952, and served until her death in 1969, she contributed much to the library in organization, books from her personal collection, and developing a generation of kids who loved to read.

And each Librarian thereafter has added her own touch, with past Librarians never truly retiring, as ArVel White’s influence is still felt here, and Janie Jacobs and Donna Holzrichter now serve on the Library Board.